skip to main | skip to sidebar

How to get from 0 to pregnant in 365 easy steps

No really, every boy needs a tractor. 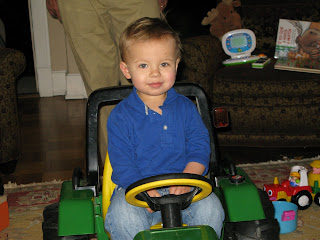 Yes, indeed, 2010 would not be complete without a nearly lifesize, or boysize, tractor. How the worm turns. 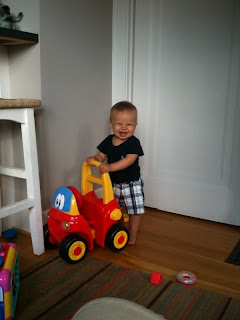 One year. A year. Already. I was prepared to be overwhelmed by the love I would feel for my little Adam. I was unprepared for what fear would feel like. Stark, paralyzing, heart wrenching fear that something, anything could happen to my little boy. It scares the hell out of me, but I've never felt so alive. To love like this...to have such a wonderful, funny, smart (oh, she can go on and on and on) little boy. And to think, it almost wasn't.
One year. On Wed. One year ago. My little boy. My funny little bad boy who warns me before he does something he's not supposed to..."no, no, no" (pronounced "nyah, nyah, nyah") with a shaking of the head and a wagging of the finger. Whose little eyes squint like his Mommy's and whose skin color is ridiculously tan like his Daddy's. My little boy who walks like a little Frankenstein with arms extended and points to every person, in every picture as "Mama." My avocado loving and paper eating sweet boy.
Sigh.
One year.
Posted by Melanie at 3:52 PM 5 comments: 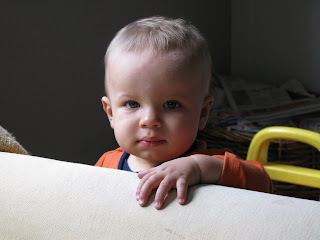 Almost 11 months old. My little Adam is helmet free and if you look closely, you can see bumps and bruises and battle scars. He's walking and into everything. EVERYTHING. Behind him is a stack of newspapers; what you can't see are the weeks of newspapers on the floor. I'm getting better about not stressing about the constant mess, but years of OCD are difficult to shed. He's finally, finally consistently sleeping through the night.
Isn't he a cutie? Really, isn't he just a cutie!
Posted by Melanie at 5:46 PM 4 comments: 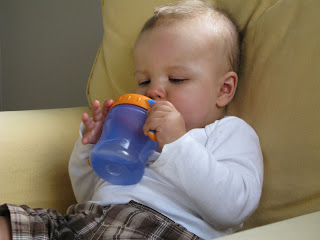 My boy is not so little anymore. Almost 10 months old. Crawling, standing, babbling, almost just about there trying so hard to walk. Sleeping through the night. Although 6:30am like clockwork feels pretty damn early. He has his own little personality and eight little chicklet teeth.
So, so, so worth it.
Posted by Melanie at 10:13 AM 7 comments: 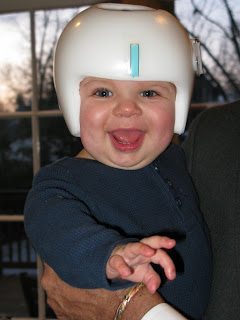 My little furry headed boy is now a helmet head. His torticollis and our slavish insistence that he sleep on his back (swaddled as tightly as a burrito) has resulted in a flat head. Parental guilt dictates that that be corrected, as well as the possibility that the bald is beautiful movement heats up in his later years. He has adjusted well; his parents? Not so well.

Our first experience with another little helmet head was at the plastic surgeon's office for Adam's consultation. I went over to talk to the mother (of said little helmet head) to find out how it was going and got a good look at her son. One eye was squinty, the other was as wide open as a cyclops. His skin around the helmet was red and scratchy and he looked, well, foul. She brought him over to see Adam, who eyeballed the boy and then looked up at me and said, "Ah Goo." "Ah Goo" is universal Adamese for, "what the hell are you getting me into." I assured him that he was too darn cute to get the permanent stink eye.

Take a look at the picture above. Yes, Ah Goo.

He's actually loving the helmet, though it's impeding some of his developmental milestones. For example, he's learned that crawling's more fun if he uses his helmet to propel himself forward rather than his hands. Look, Ma, no hands! I've caught him banging his head on the hardwood floors and deliberately rolling into furniture just to experience the inner helmet twanging sensation. The great thing is that he was helmeted during our viewing of the winter Olympics so he was able to bond with his own kind.

His sleeping sucks, truly sucks. I'm not sure if it's helmet related or teething related, but he's definitely regressed. Last night, he woke up every three hours. Crying, inconsolable. I can handle this much better now than when he was an infant and I didn't know what the hell I was doing. I still don't know what the hell I'm doing but I figure the child will sleep through the night at some point in his life. It now makes sense to me why people have children in their 20s and not their 40s; they're too young and dumb to have any expectations.

I hope all is well out there in blogland. More later.
Posted by Melanie at 10:27 AM 16 comments:

What Happens When the Rents are at Work. 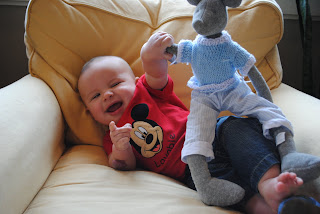 Usually Adam and Rodrigez (the Rat) cage fight in the pack-n-play. Many, many times, I've glimpsed over at my child and Rodrigez
has pinned the poor lad. I was happy to see that, while I was at work, Adam and Rodrigez learned to play well together. Look at the handholding and laughter. I was also impressed that they were able to set up the camera and get such a good shot of them playing nicely. And Adam's only six months old. Rodrigez, no idea when he was manufactured.
Posted by Melanie at 9:35 PM 3 comments: 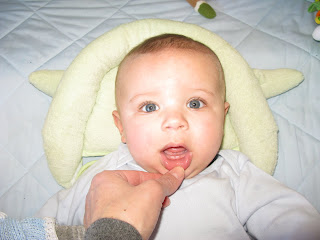 Melanie
I'm a 39 year old lawyer, married since June 2006, who never thought it would take 365 days, much less 365 steps, to get knocked up. 880 days later, the final IVF (the hail Mary pass) turned into numerous positive pee sticks and a sticky embryo. My sweet baby boy was born August 18, 2009.

A brief history in time...